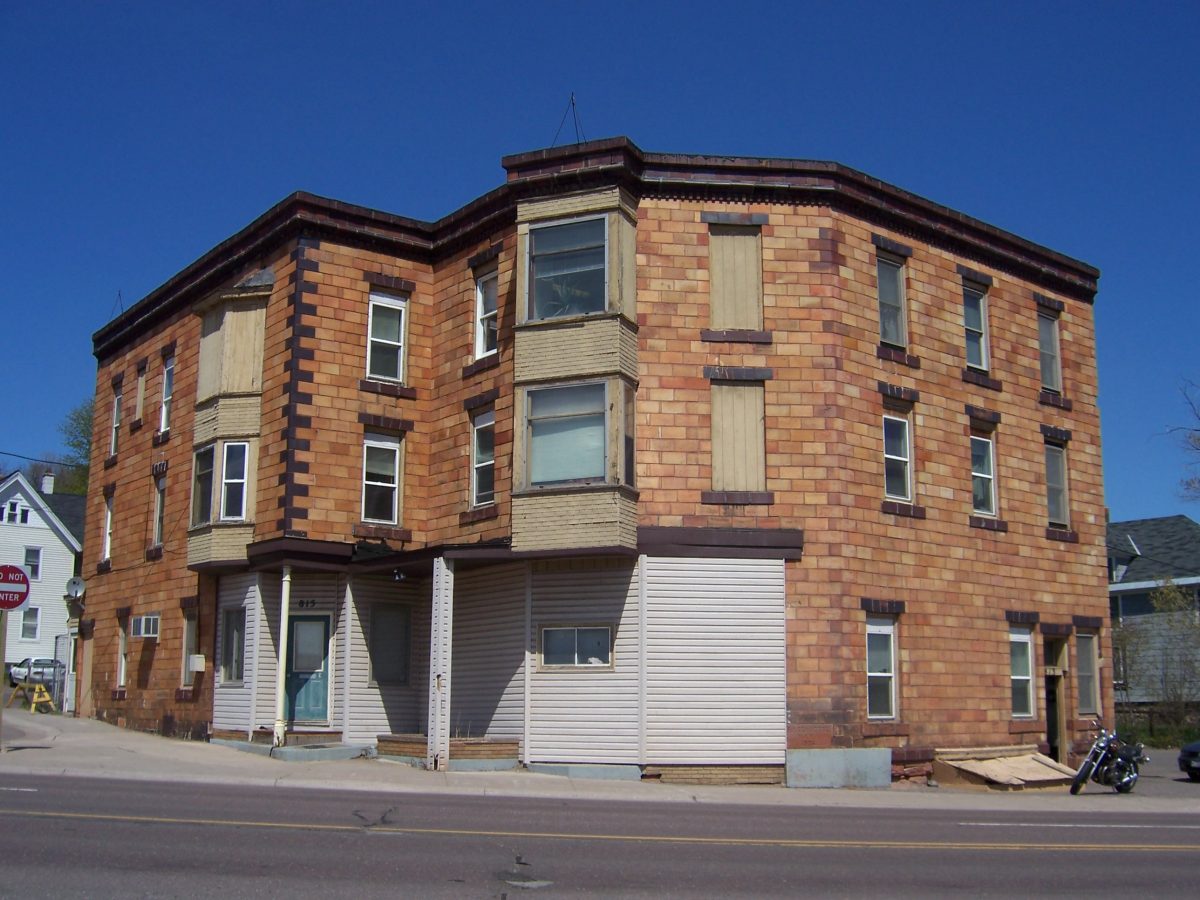 S. A. Gennette commissioned this unusual tile-block building in 1906.1 One of Pierce’s last works, he died less than two months before it opened in November 1906. When the building opened Gennette claimed to have prepared the plans and specifications and to have supervised construction, but Pierce’s obituary stated that Pierce had prepared the plans and specifications.2

The building occupies an odd-shaped lot at the corner of Elevation Street and what was formerly known as Railroad Avenue. The orange tile of the walls was accented by dark brown tile sills and lintels, as well as a modillioned cornice. The storefront windows have been covered with vinyl siding and some of the upper-story windows have been blocked.

Samara (also written Sanara) Gennette was Michigan-born of French Canadian parentage. He ran the Station Saloon in a previous building on this site beginning in about 1897. When the new building opened, he advertised Wines and Liquors, Steam and Tub Bath Rooms. Just a week before opening, Gennette (or perhaps the newspaper reporter) was coy about the building’s purpose, noting that the first floor was well suited for a drug store, with steel ceiling and walls, but considering that Gennette previously ran a saloon it seems likely that the new building was always intended for that purpose. The barber shop and baths in the basement were also appropriate businesses to be connected to a saloon. The newspaper discussed them extensively: “The barber shop… is equipped with the latest and most approved fixtures. Two chairs have been installed… Connected with the barber shop is a number of bathrooms, which are first-class in every respect and include regular tub baths, steam and sweat baths with dressing and cooling rooms adjoining. The dressing rooms are provided with individual lockers for the use of the patrons of the place, and it is Mr. Genette’s [sic] plan to provide sleeping rooms for those of the patrons who wish them.” The basement also included a laundry for the use of the tenants. The second floor contained two eight-room apartments and the third floor had two five-room apartments, all with electric light and gas, baths, and hot and cold water. Gennette, his wife, Virginia, and their children lived in one of these apartments.3

Prohibition put an end to the saloon. Gennette ran a candy kitchen in 1920, with a soft-drink parlor next door. In 1930, Gennette ran a grocery here. He still operated it in 1939, when he was 70 years old.4

Buildings by Byron H. Pierce in the Copper Country