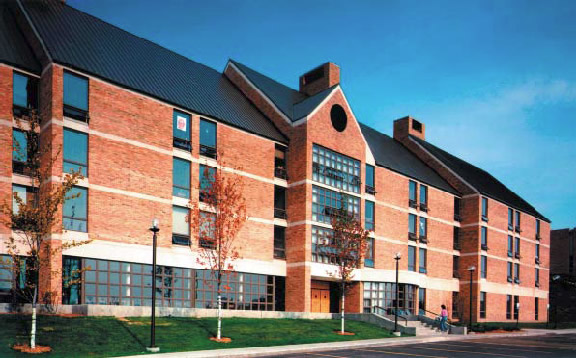 Finlandia Hall is a four-story, 192-room, co-ed student dormitory that is home to 184 students.1 Finlandia Hall was completed and ready for occupation in September of 1984 after a $3.5 million loan from the Federal Department of Education.2

The building’s façade faces south and is said to have a “domestic character” that resembles the local homes surrounding it. The hall is built on a steep hill and has a steeply pitched roof and division of four staggered sections of red brick trimmed with white belt course.3 Finlandia Hall made it possible to consolidate the entire student housing, which was previously scattered across campus, into one hall. The hall has separate study areas and comfortable living spaces, making it easier for students on campus to enjoy college life.4 The architectural design and materials used help to incorporate this new building with the historic campus surroundings.

TMP Associates won two awards for the design of Finlandia Hall: the American Institute of Architects Detroit Chapter/Honor Award in 1985, and the Masonry Institute of Michigan & Michigan Society of Architects/Michigan Award for Excellence in Masonry Design.5

Buildings by TMP Associates, Inc. in the Copper Country