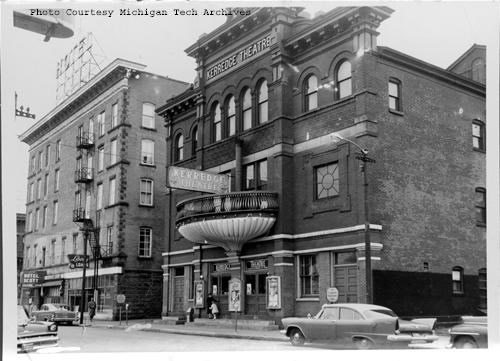 The Kerredge Theater was the region’s premier theater, serving not only Hancock, but Houghton and even Michigan Tech as well. Located on Quincy Street just east of the Scott Hotel (built 1906), the theater seated 1,565 (slightly less after motion picture projection equipment was installed). Constructed by Gauthier Bros., the ornate, three-story building had a projecting center section with an elaborate balustraded balcony at the second level that also served as a marquee. The brick building was crowned with a heavy, modillioned cornice. The building had some elements of the Renaissance Revival, with round-arched windows at the third floor, symmetrical fenestration, and some Classical detailing.1

Buildings by Oscar Cobb in the Copper Country