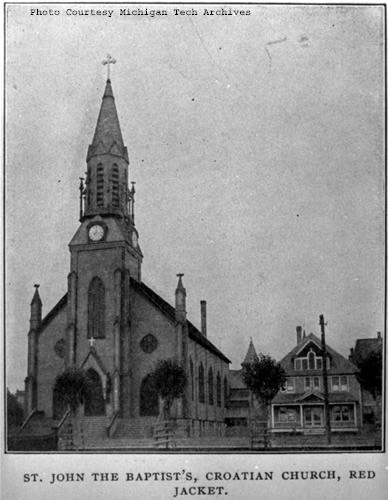 Another building possibly designed by Nystrom was the Catholic church for a Croatian congregation. As described in the newspaper, the church was to be constructed of Jacobsville sandstone with two large towers and three front entrances. As built, however, the church was wood-frame and had only one tower.1

The interior was to have tile mosaic floors in the vestibule that gently sloped toward a very large sanctuary which could hold up to 510 people in oak pews. On either side of the sanctuary were two smaller altars and adjoining dressing rooms. The ceiling was to be finished in plaster with grained arches and elaborate decorative designs. At the time of the newspaper article, construction of the church was estimated at $25,000, and Calumet & Hecla president Alexander Agassiz was expected to give a large donation.2 When that did not come through, the congregation either had Nystrom scale down his plans or engaged a new architect. The church burned in 1925; its brick replacement was completed in 1941.