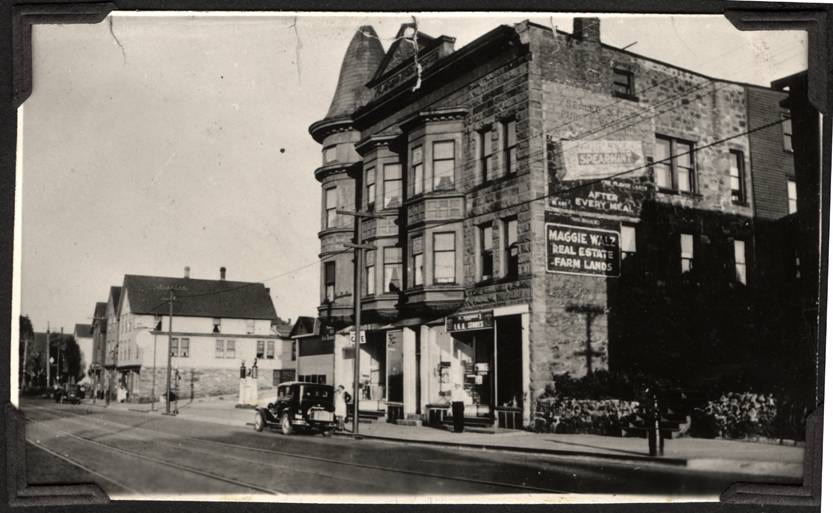 Maggie Walz, a Finnish immigrant, was a businesswoman and real estate developer who commissioned this building for herself. Initially a drug store and a candy store occupied the commercial spaces; Walz had her offices in the building and lived upstairs. She owned the building until her death in 1927. Subsequent owners included the Blander family, who lived upstairs and operated an IGA store in one of the commercial spaces in the 1940s. Most of the building was demolished in the 1950s; the back and side walls of the first floor survive. It is now used as a bus garage by the school district.

The stone building was faced with rusticated ashlar sandstone. A turret on the corner with a conical roof and two two-story oriel windows on the front added to the liveliness of the façade. The large pressed-metal cornice was surmounted by a pediment with pressed metal trim including the stylized signature of Maggie Walz, as well as the date the building was constructed.

An undated newspaper clipping from the vertical files of the Finnish American Historical Archives at Finlandia University reads as follows (missing words have been supplied in brackets):

“PLANS BEING PREPARED/For New Building for Maggie Walz on Pine Street.”
“Architect C. K. Shand is at work upon the plans for a new building [for] Miss Maggie Walz, that will be quite an improvement to the appearance [of] Pine Street and will at the same time provide additional store and living quarters for Red Jacket. The structure will be of brick or stone and [will] be three stories in height. The [first] floor will contain store rooms, [while] the second and third stories will [be] arranged for offices and flats. [The] building will cost somewhere in [the] neighborhood of $15,000 when complete. It is expected that it will [be] erected this summer.”