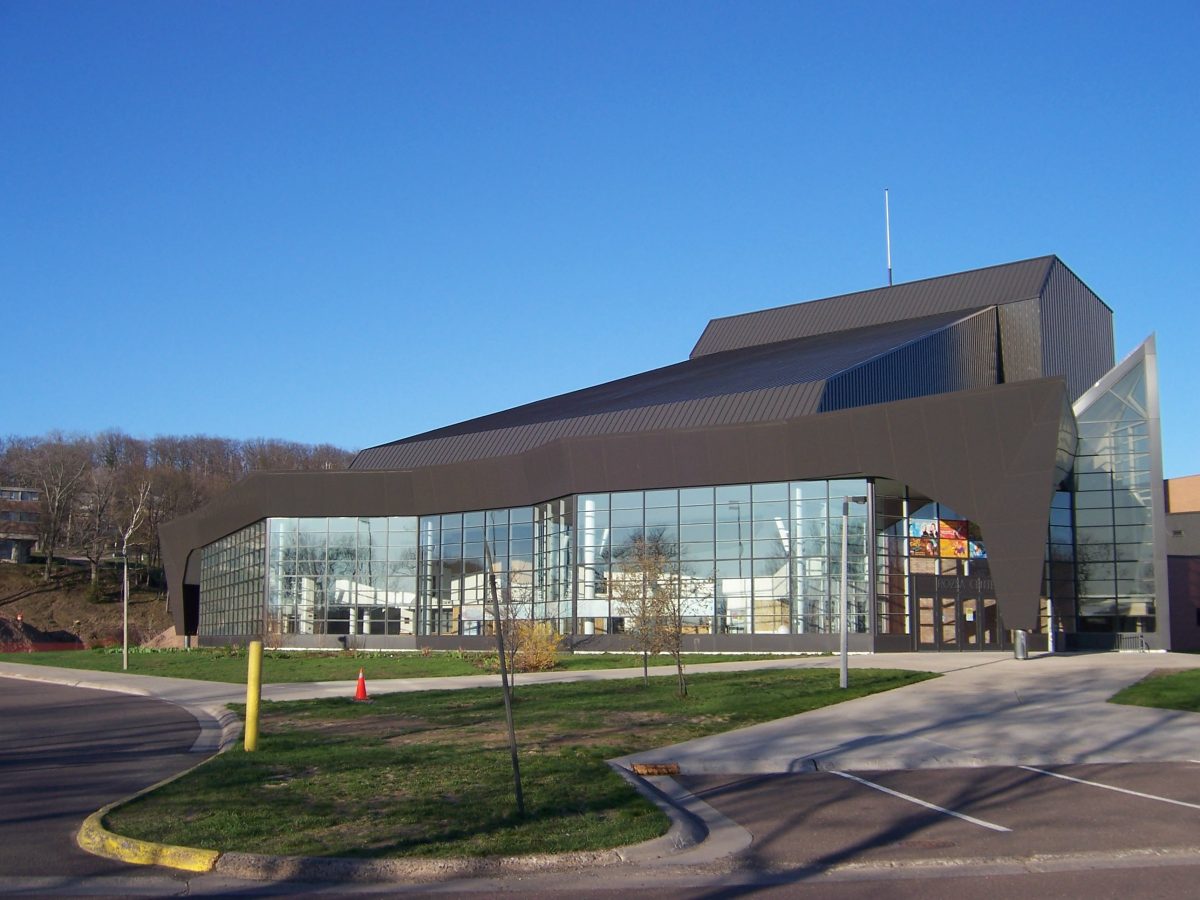 The Rozsa is an 80,000 square-foot structure, built to resemble the leaning look of the local copper mine hoists and shaft houses. The facility includes a main stage designed by acoustics and theatre consultant, George C. Izenour,3 as well as recital facilities, ticket office, concessions stand and coffee shop, practice rooms, dressing rooms, a wood shop, classrooms, conference rooms, and offices. The main theater holds a maximum of 1101 people and consists of two tiers separated by a large walkway across the center, halfway between the stage and back wall.4

The stage can be used for performing arts as well as concerts and musical performances. The Rozsa owns a 30 ton shell that can be put into place when needed for concert and musical performances.5 More recently, in 2003, the entire sound system underwent a redesign due to some uneven acoustics.6 The two main differing setups are shown in the diagrams below.

The frame of the Rozsa consists of a total of 750 tons of steel.7 The outside walls are masonry with steel columns and built to be able to withstand large wind gusts that are prevalent on the MTU campus. These gusts can cause suction wind loads of over 80 pounds per square foot on the skin of the building as well as the roof. The metal roof has one large sloped section that splits into a few smaller sections that cover the lobby area. The roof was originally to be made of copper, but due to an increase of copper costs the contractors were unable to use the local area’s most prized natural resource. The roof also was designed to be able to hold 450 pounds of snow per square foot.8

The outside of the building is mostly brick, capped off with the metal roof that seems to spill down off the roof and onto the sides of the building. The lobby area in the front of the building is encased in a large wall of glass and framed with large metal arches. The glass wall faces to the northeast capturing views of the local wooded areas lining the Portage Lake. The Rozsa is a very stunning piece of architecture in the area, and even though it is very unusual building, it fits into its surroundings as if it has always been there.

The Rozsa received the GLFEA Steel Systems Excellence Award for medium-sized buildings in 2002 for its remarkable steel “skeleton” that is shown above.9 In 2002, the Rozsa won the Design Award from the American Institute of Architects of Detroit.10

— For more information, see the Rozsa’s History and Facilities pages —

Buildings by Gunnar Birkerts in the Copper Country