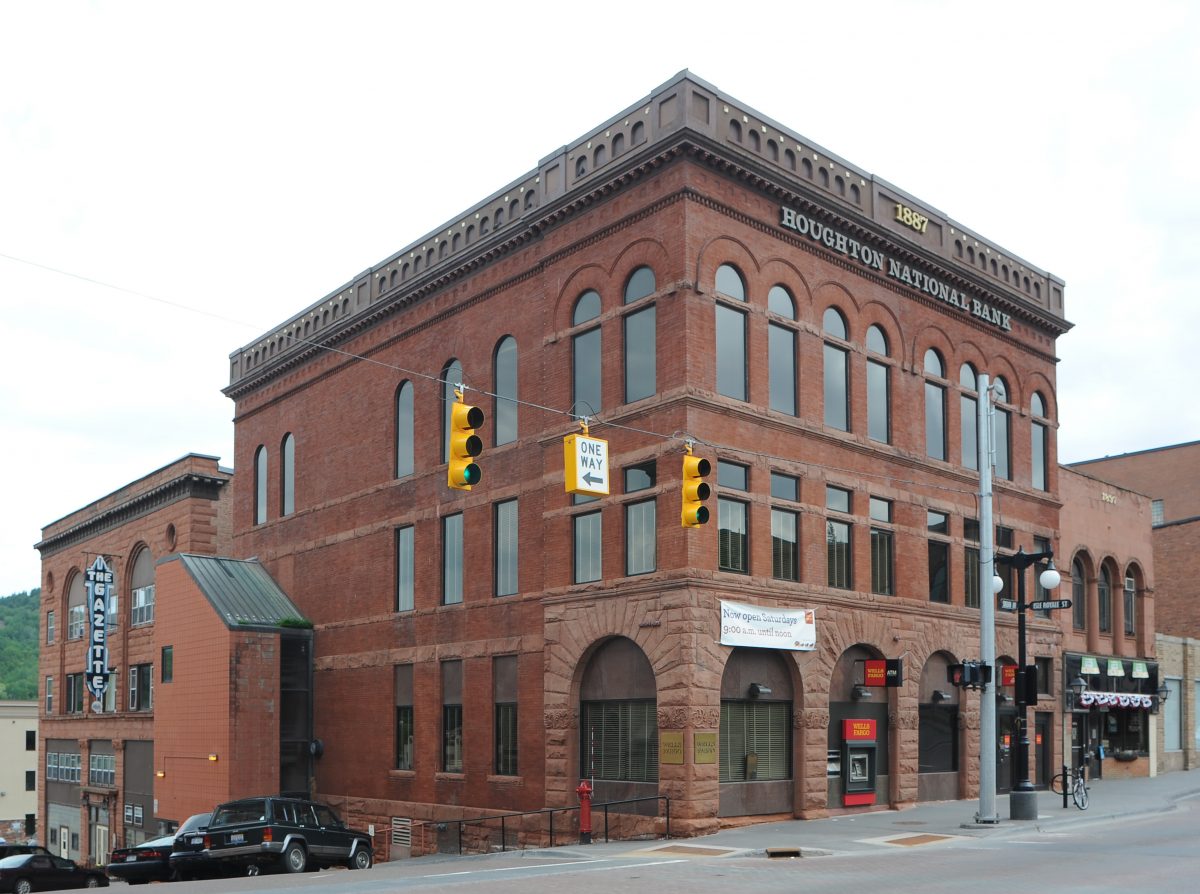 With the new name came a new image so the bank decided to relocate. The bank purchased land in downtown Houghton from Charles Ruelle, Jr., and his wife for $10,200, then hired Scott to design the building. The Wehlman & Gipp Company from Ishpeming, Michigan, constructed the building, the first brick block in the Copper Country.1 The grand opening occurred on August 10, 1889. At that time, the newspaper described the building: “Nothing equal to their brownstone arched and plate glass front, their massive antique oak counter, doors and wood finish, their long line of side windows, and their great floor space and height of ceiling—can be found in any other banking establishment north of Milwaukee.”2

During the first few years the bank utilized only the west half of the building and leased the other half to the Dry Goods Store of W. B. Hoar and Van Mourick. In 1902 the bank’s business started to grow, and slight renovations were completed to accommodate the growth. By 1940, the bank had changed its name to Houghton National Bank. Further renovation occurred in 1961 when the bars and anti-robbery features were removed to create a friendlier atmosphere.

In 1978 the bank underwent major renovation, and the building was completely gutted from the inside out. The third floor, no longer a storage area, was converted to offices. The exterior was sandblasted and sealed. The wooden cornice was replaced with a fiberglass replica. The main entrance was relocated closer to the east end of the building and the windows were replaced by fixed panes of glass. Involved with this remodeling was the Herman Gundlach Company, which also installed an elevator and two skywalks for added convenience. The south skywalk connected to a 100-car municipal parking structure that was also built at this time. Also, upgrading the technology, an Automatic Teller Machine was added for 24-hour banking services.3 After this $1.25 million renovation, the building re-opened on September 29, 1984.4 Today this building provides banking services through Wells Fargo.5

The most prominent features of this Richardsonian Romanesque-style building are the textured exterior and the large, flat-paned windows. The rough-faced Jacobsville sandstone first floor has large, round-arched windows and doorways. Above, the walls are brick with sandstone beltcourses. The third-floor windows are round-arched. The walls meet the flat roof though a decorative cornice, capped with an elaborate parapet.