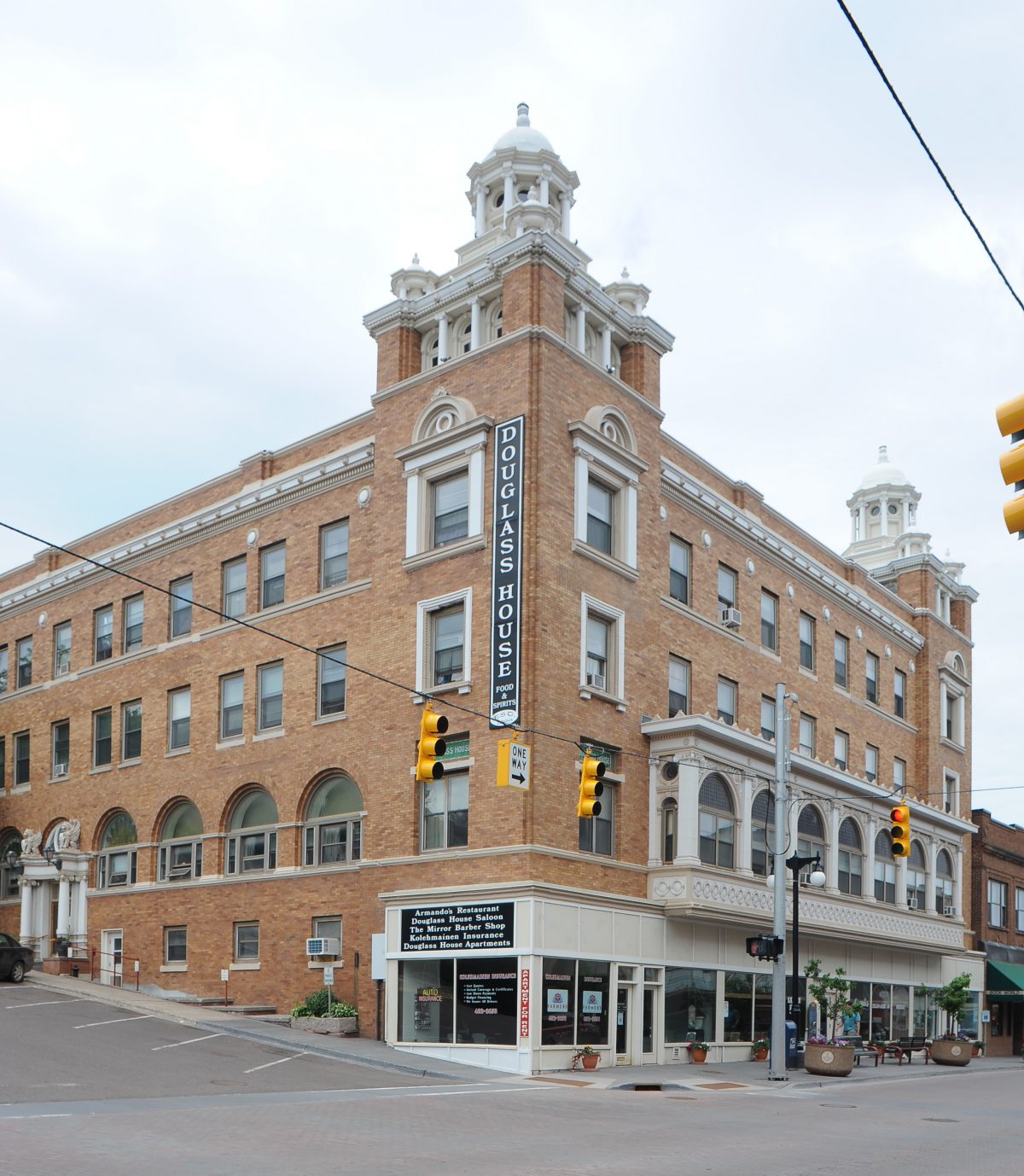 The original Douglass House was built in 1860 out of wood and set back from Shelden Avenue, on Montezuma, with a terraced garden stretching to Shelden. Ottenheimer was asked to design an addition to the Douglass House that would be grand enough to welcome the important businessmen of the mines. The design extended the Douglass House to the edge of Shelden and doubled the hotel capacity from fifty to one hundred rooms. Today the building incorporates a bar and restaurant on street level, and the hotel rooms have been renovated to accommodate senior citizens.

The buff-brick building has white-glazed terra cotta trim. The distinctive corner Baroque corner towers do not appear on Ottenheimer’s drawings and were probably added during construction.1 A seven-bay-wide balcony extends across the front at the second-floor level. This”loggia,” along with the gold-colored cupolas, were said to lend a “picturesque and oriental” air.2 An elaborate entrance to the hotel portion is on the east side, while the north front is devoted to storefronts. In 1901 the hotel suffered a devastating fire, which broke out in the rear, frame portion. The back portion was built of brick to match the new front.

The newspaper described the hotel on the eve of its opening on August 4, 1900.  The first floor, facing onto Shelden Avenue,, held the bar, billiard rooms, and railroad ticketing offices.  The main entrance was on the side, on Isle Royale Street.  The general reception or reading room featured a tile mosaic floor, paneled wainscoting of quarter-sawn oak, a marble baseboard, dark-colored burlap on the walls, a light-colored frieze, and gold stenciling on the ceiling.  A large chimney piece of dark-colored wood had Ionic columns; above the fireplace was a large moose head.3

Ladies had their own separate entrance and parlor, “so that any woman can enter the apartment and by touching a bell, gain any of the conveniences of the hotel without being required to show herself in the hotel office.”  The main dining room, measuring 55 by 30 feet, had wood paneling extending 6 feet high, painted with a white enamel finish.  The kitchen was illuminated by two skylights.  Nearby, occupying the space of the former bar was a sample room, “furnished with wide tables where traveling men can display their goods to prospective customers.”  The guest bedrooms were kalsomined in two colors.  There were eleven private bathrooms and two public lavatories.4

The $100,000 building was heralded as “the finest hotel in the Upper Peninsula” and it promised to make Houghton “the Mecca of the entire traveling and tourist fraternity.”  John C. Mann, the proprietor, was apparently lured to Houghton from Ashland, where he was famous for his planked whitefish.5