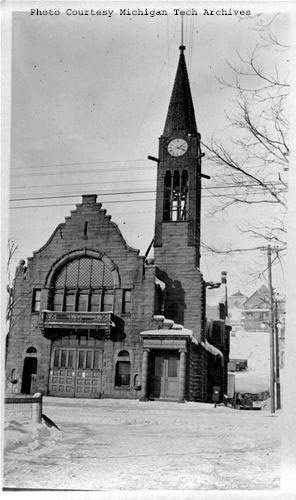 In February 1898, three architectural firms submitted plans for this commission: William T. Pryor, C. Archibald Pearce, and Charlton, Gilbert & Demar. The latter firm was selected, on Feb. 23, 1898 and paid $385 for the plans and specifications on June 1.3

The newspaper lauded the building:

The building, of Portage Entry sandstone, is two stories high, with a Venetian clock tower at the corner by the main entrance, and is 49 by 96 in ground dimensions. The front elevation with its tower and the battlements and the large triple window in the center, presents a splendid appearance from the street and is a credit to the architects, Charlton, Gilbert & Demar of Marquette and Milwaukee.1

…the handsomest feature of the building. This room, with its hardwood floor, vaulted ceiling and heavy cornices, has been decorated in warm terra cotta, shading into lighter colors in the ceiling and elaborately frescoed. It is a masterpiece in its way, and with the council chamber reflects the greatest credit upon the Associated Artists. The assembly hall is lighted by 120 incandescents set in the ceiling.2

The building was distinguished by a 90’-high corner tower, used for drying fire hoses as well as displaying the town clock. The rough-faced sandstone building had a broad front with a Flemish gable. At the second level, a large round-arched window illuminated the council chamber. Hancock became a city in 1903.