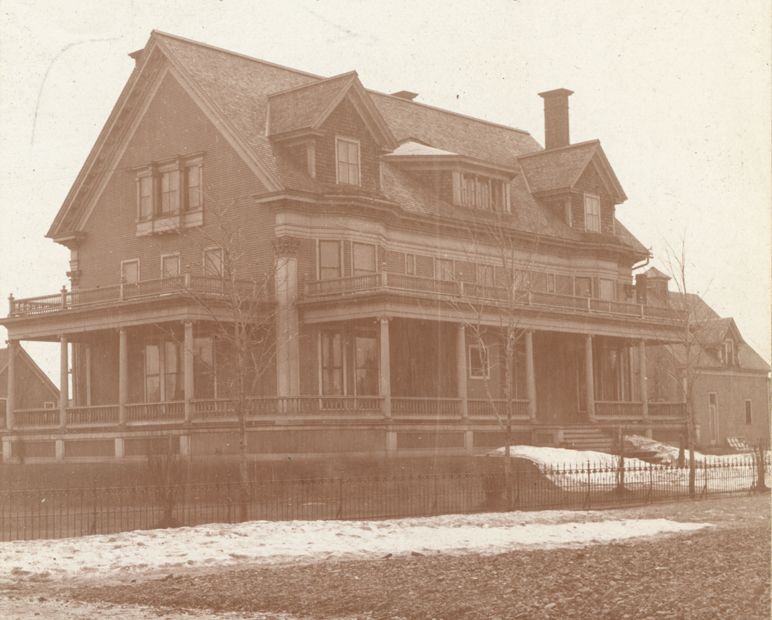 This grand house was built for Susan Daniell, widow of mine captain John Daniell.  Susan Edwards, born in England in 1849, immigrated to the Copper Country as a child.  She married John Daniell in 1869.  They lived at Copper Falls until 1876, when Daniell became head of the Osceola Mine.  In the early 1880s, he spearheaded the development of the very successful Tamarack Mine.  Daniell died in 1898.1

The Daniells had eight children, seven of whom were living at home when Susan undertook construction of this new house.  The children were: Alice, age 28 in 1900, at home; John, 26, a civil engineer who went on to become president of the Wolverine and Arizona Mining Company and a vice-president of the Calumet Gas Company; Richard E., 24, a clerk in a mine office; Anna, 22, at home; Edwina, also known as Winnie, 18, at home; William, 17, at school; and Marian, 13, at school.  By 1910 her oldest son, Joshua, an artist, had moved back home.  By 1920, besides Joshua the only other child living at home was Marian, along with her husband, a dental surgeon named Carrol W. Pratt.2

The Colonial Revival-style house stood two-and-a-half stories tall with a side-gable roof.  Two-story bay windows flanked the central doorway.  Gable dormers flanked a shed-roofed dormer.  A porch across the front and a porch across the side were both crowned with balusters.  In the 1970s, when the building served as a home for the elderly, a large two-story addition with a yellow-brick first story was built on the south side.  Probably at the same time a large gable-roofed entrance was added to the front and the whole of the original building covered with vertical wood siding.