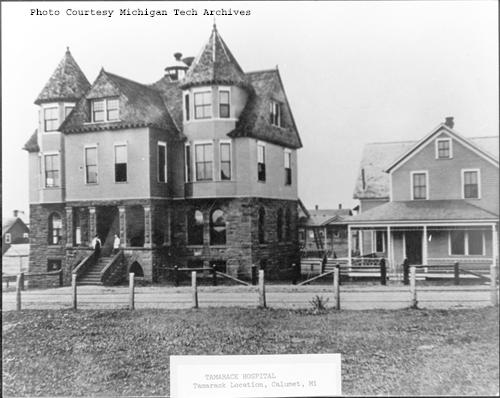 The Tamarack Hospital was hailed as a “model hospital” when it was constructed, although in appearance it resembled a Queen Anne Revival mansion.1 The walls of the 60-foot-square two-and-a-half-story building were sandstone on the first floor and frame above, sided with narrow clapboards. The gable roof was punctured by symmetrical three-story towers on the front, flanking a gabled projection.

The basement contained a drive-in area for ambulances, a freight elevator on which to take patients upstairs, a drug store, and kitchen. The first floor included a 20’ x 30’ reception hall, laboratory, four doctors’ offices, and dispensary. The second-floor front was intended to have a large porch enclosed with movable glass windows for convalescents, but it is uncertain if this were built because the historic photograph does not show it. The second floor had three large wards, one private one, and the operating room. In the attic were bedrooms for dispensing clerks or other employees. The interior was finished with quarter-sawn Georgia pine and adamant plaster and the floor-to-ceiling heights were 12 feet.2

The modernity of the hospital apparently rested with its heating system, which was steam-heated hot air, and which promised constant air turnover. “The structure will be heated by steam, but it will be by the indirect method and not the mode generally employed in the copper country. Instead of having coils in each separate roof [room] in the building the steam coils will all be together in the basement. To these coils cold air from without will be admitted and will be heated with contact with the coils. It will then be carried by pipes to each of the rooms to a point about 8 feet above the floor. The warm air naturally arises to the surface. It then rolls along the ceiling and as it becomes cooler and is succeeded by successive waves of hot air it sinks to the floor along which it moves until it reaches an exit level with the floor. By this system the air in the rooms is constantly being renewed by volumes of warm dry air and which has been drawn from without and the stagnant air is removed. The system is incalculably beneficial in a hospital.”3